I hope you have been enjoying our student profiles! This #celebrate12 project marks our studio’s 12th birthday. I’ve asked 12 people to share their yoga experiences with you.

Jewell Ward and Jim Brooks (married 48 years!) have attended classes at Evergreen for several years. First, Jewell got going with classes and after a while Jim came too. It’s fun to see how many couples practice yoga – some together, some apart. They don’t attend the same classes, so it was fun to spend an afternoon taking pictures and watching them show each other their best poses. 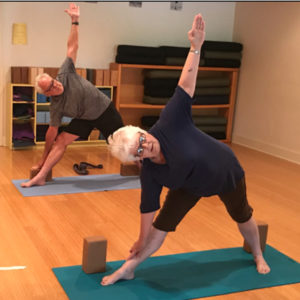 How long have you been practicing yoga at Evergreen?
Jewell: I think I started in early 2007, so 12 years.
Jim: Jewell told me Leah had a beginning class for men and I thought I should try that. I had done a
yoga class 2 or 3 times as a father and husband and not as someone interested in a yoga practice.  Each time I had gotten nauseaous — I imagine because I thought the instructions on getting off the floor was

about as necessary as the warnings for using an extension cord.

I enrolled in a meditation class at Rhodes – I think to become one with the universe. A great class but I found the sitting still hard. A friend
had often described his Tai Chi practice as “meditation in motion” so I started taking a Tai Chi class at Rhodes.

The instructor wanted to share with the students the history of the moves we were learning. Sometimes he would say this move or that move could not be taught to the daughters because they might marry outside the tribe and so the move would become ineffective in a possible battle with the daughter’s new tribe. But, “One with the universe” and “Can’t be shared with our daughters” just didn’t fit together for me. Plus I was really lousy at Tai Chi.

So, I thought maybe I should really try yoga.  And this time I actually heard that getting off the floor was not a head-first move but rather a rolling to the side and using your arms to sit up – the end of my nausea and the start of my listening. 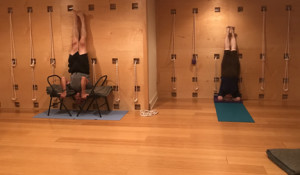 Why did you start yoga?
Jewell: I had a back muscle issue, but I didn’t stop yoga when my muscle issue became less limiting. I realized that I had little in my life that was ONLY mine. It was something I did – for me. I tried different classes, at different times. But over the years, Sunday morning became my treasured, committed and determined time. If I was on call for my group, all the residents at the hospital knew I was unavailable during those Sunday times. I began when I was 63. I was tickled at how I could do many of the poses – and chagrined at how many I could NOT do. Yes, I was comparing myself to others in the class. Many were ‘better.’ I remember your wise comments (at least my paraphrasing) beginning to cut through my thoughts.

Sunday mornings, yoga is still my rock. Each Sunday class is different – sometimes in class I find myself anticipating what is next. Other times, I wonder if I will make it through. Even when I allow myself to peek at the clock during a class – I am ALWAYS better for going. 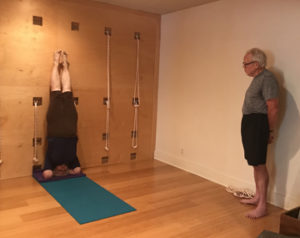 What is/are your favorite pose(s)?
Jewell: Tadasana, Chair Sarvangasana, Trikonasana
Jim: I’m not sure I would say I have a “favorite pose,” but my longest journey has been with the tree pose. (Jim followed his answer with a request for me:

“And almost anytime during the week would work for my special session on camel and maybe a headstand review. Also working on the pose with feet very wide and bending forward from the hip putting hands on floor and dropping head.”

(I want to include this because this is classic Jim — always working on something new, asking for another challenge, and experimenting in his practice at home – Leah.)

What else would you like to share about your job/hobbies, etc.?
Jim: I do age, hobbies and family but not job.
Jewell:  I am now 75. I credit my classes with you and Tedrah for keeping me as mobile as I am. Jim, our son Travis (then 4), and I moved to Memphis from Baltimore in 1979, settling in Midtown because it ‘spoke’ to us. We have never regretted it.

Jim was a marathoner and continued when we moved to Memphis, eventually becoming a triathlete. Jim and Travis began cycling together – training, cycling club, and then races. While my partner learned about the Mid-South from fishing and hunting, we learned by going to runs, triathlons, and cycling stage races. It is a passion that Jim and Travis revel in the most — to this day. I, too, ran for many years, and even trained for a marathon. I got through the 16-miler that ended with shin splints, and that sidelined me for long distances.

We enjoy Memphis more each year that it has become a bit more cosmopolitan, all the while retaining its unique roots. And from those roots come beautiful old trees, aggravating at times, but well worth it. I have had an active academic and clinical career as faculty in Medical Genetics at UT/ULPS. In my years of experience, I have seen patients and families with a myriad of genetic disorders and birth defects. Every one of them has taught me so much in their own right. They have made me aware of how far we need to go to truly help them. I have tried to pass along pearls of wisdom to eager medical students, residents and fellows. I find that each group I have taught made me more aware of how far we’ve come in our scientific knowledge of genetics but, at the same time, how far we have to go.

Our son Travis and his wife, Taska Sanford (now live in the Bay area), have enjoyed yoga in their neighborhoods there. I loved seeing Travis leaving for work in a hurry, but stopping for a quick downward dog on this way out the door! They have shared yoga at Evergreen with us during holidays visits with us here in Memphis – my gift of family yoga sessions during a time of frenetic pace. They have a 5-year-old daughter, who has been introduced to yoga at her pre-school as well as at home. Yoga mats, belts, bolsters and blocks await us there when we visit – if and when we want.

We peruse houses in Northern California now, looking ahead to a possible relocation upon my retirement. No matter what neighborhood we consider, one of the first things I do is Google Iyengar Yoga studios. I anticipate that retirement will begin with coffee, books, family, yoga, nature and trees. The rest will follow. Yes, Evergreen Yoga was 2 blocks from my house. Would I have started yoga had it been in another neighborhood? I will never know. Garbling a line from the movie ‘Two for the Road’ – “but it DID exist.” And I am glad.