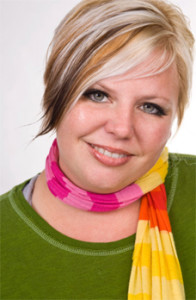 A life-long theatre performer and dancer,

Courtney began practicing yoga with Leah shortly before the doors opened to EYC in 2006. It soon became evident that yoga was a necessary tool for calmness and mindfulness against the daily grind and the fast-paced sprint of the theatre world.

In under two years of yoga with Leah, practicing turned into studying and Courtney started to dip her toes into the wonderful sea of teacher training. In 2009 she began teaching classes and in 2014 she started teaching at the University Club, where she still teaches today.

Yoga not only changed Courtney as a performer, but as a person. Wound tight emotionally, wild socially, and loose spiritually, her yoga practice with Leah opened a door to a safe space that allowed her to ask new or better questions, learn new or deeper truths, and find celebration in her self and her own body. In every body.

Courtney is also soon to celebrate her 20th Anniversary with Playhouse on the Square where she is currently the Director of Special Events, as well as a member of the Resident Company. She works as an actor, a director, a choreographer, and a fight choreographer.

She has been recognized as an actor/combatant through the Society of American Fight Directors and she received her Bachelors degree in Theatre and English from the University of Alabama. She has also received Ostrander Awards for her performance as Tracy Turnblad in Hairspray and for her choreography in Priscilla Queen of the Desert and The 25th Annual Putnam County Spelling Bee. Courtney is a wildly avid fan of Memphis in general and, together with photographer Carla McDonald, operates the photography website, FindMemphis.

Courtney is genuinely beyond honored to return to her first and only yoga home and encourages people of all ages, sizes, genders, races, and spiritual leanings to come on in unapologetically and uncover the wealth of possibilities available to you in your own skin and heart through the practice of yoga.