When resistance shows up

Awesome!  You’re off to a good start, tuned into your willpower and tapping your toes to the sound of your own success!

Then, BOOM! He shows up.

After your rah-rah-rah moment of starting something cool.
After the flush of endorphins have flooded the feel-good centers of your brain.
After fifty of your facebook friends have high-fived your early efforts.

Resistance has shown up to this party in one of his disguises:

3 ways of handling Resistance & the effects:

You could buy into his “you’re too stuck, too bored, too afraid, or too ugly and your momma dresses you funny anyway” story, but don’t! Don’t quit now.

METHOD #2:
Wrestle with Resistance and try to push him away.

The harder you push Resistance, the harder he pushes back. Aggressively pushing past Resistance often backfires – leading to overwhelm. Spend too much time in overwhelm and you end up quitting anyway.

Resistance is actually performing a valuable service for you. He is there to slow you down. (There are biological reasons for this, but that’s a story for another day.)

Resistance might initially show up with a large-and-in-charge attitude, but he’s no ugly monster out to sabotage you. He is  there to get your attention.

Which is why I recommend the following method.

METHOD #3:
Wrestle with Resistance – but just enough to look him square in the eye and ask him to dance.

You’ve got to be kind to yourself and kind to Resistance during this process. Notice the Resistance and get to know the accompanying feeling.

This is not easy. You will feel more like fighting Resistance than slowing down and being with the feeling.  You may even feel more like quitting than taking your time.

But don’t fight. And don’t quit.

Think of this as a dance – not a wrestling match! And Resistance is your partner.

You have to take the lead. And you have to slow down. Listen, pay attention and breathe.

The first time you lead, it will be unfamiliar. Like trying to do a whole new dance with a new partner to music you’ve never heard. Think 14-year-old awkwardness on the dance floor.

Acknowledge the challenge. But stay with it. Stay with yourself.

Reminders can help here. Words like “Slow and easy” or “You’re catching on” or “Keep at it!” What kind of coaching would you like to hear while you’re in the ring learning a new dance?

You will get better with practice.

If Resistance shows up at your party, you might as well ask him to dance.

Coming Out of The Darkness

Saturday’s event was a huge success! 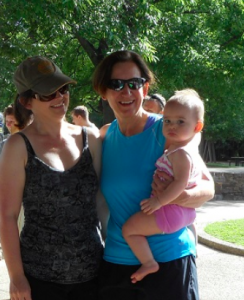 On Saturday June 21st around 8:30AM, EYC participated in Climb Out of the Darkness for the first time. This national non-profit event, started by Postpartum Progress in 2013, is  currently the largest effort to raise awareness of perinatal mood disorders. In only one year, the event has grown from 177 participants to well over 1,000 climbers. In addition to that, the amount of money raised this year nationally more than tripled the amount from 2013.

Long-time yoga student Kathy Williams came out with her daughter and grand-daughter to support the cause (pictured right)!

Upon discovering this movement last fall, Beth Hayes knew right away that Memphis needs to be a part of it. As a Postpartum Doula, she knows better than most how easily women can fall prey to perinatal mood disorders. 1 in 7 mothers experience mood disorders after the stress and hormones of having a baby. Of those women, only about 15% seek treatment for pregnancy-related mental illnesses, such as postpartum depression. As a result, “suicide is one of the leading causes of death in the first year postpartum” according to Postpartum Progress. 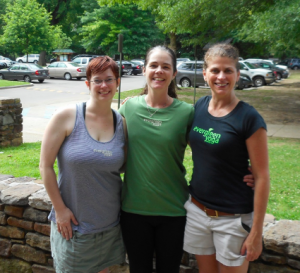 Here’s a picture of me (at left) with EYC teachers Erin D.H. Williams & Laura Allen — proudly sporting our EYC gear. You can tell it was a good day!

The gravity of these statistics and Beth’s personal dedication to the cause are how Team Memphis was able to raise over $3600 and get almost 100 people out for the climb on Saturday morning, making us one of the largest climbs in the country. The weather was beautiful and families showed up in droves to unite the community and support a great cause.

Throughout the morning, photographer Erica Jancelewicz grabbed photos of all the adorable moments that inevitably happen when kids are having fun. She also carried the COTD “I’m back” sign, which offers women a chance to capture their bravery at surviving their own postpartum battles. The photos are sent to Postpartum Progress and archived as part of the event. There is no better way to support people who are suffering than saying “you are not alone, I went through this too.” 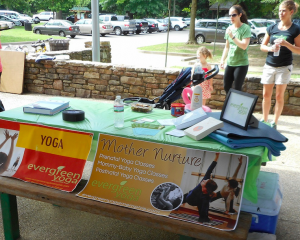 Here’s our EYC booth (left) where we displayed a small taste of what we offer mothers at every stage of pregnancy and motherhood.

Organizer Beth Hayes was thrilled with the turnout and emphatically reassured everyone that she would be back again next summer (June 20th, 2015) with the same zealous devotion to this cause. Team Memphis was one of the top 10 contributors to the $150K raised worldwide for Postpartum Progress.

I was so proud to be there as a representative of Evergreen Yoga Center and offer my encouragement to everyone that showed up for this great cause. Go Memphis!

Getting started with your home yoga practice 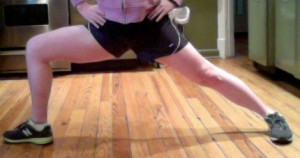 Sometimes I spend so much time thinking about doing something that it feels like I’ve already done it.
Even after all these years of practicing & teaching yoga, I can think myself out of getting started with the first pose on the mat.

Planning to do some yoga can take up so much time, there’s no time do actually do the yoga.Maybe it’s pathological — some form of procrastination or resistance, but that’s a story for another day.

3 tips to overcome overthinking & get going:

How’s that for simple?

Most of the time I put my mat down at the front door. It’s the most un-cluttered spot in the house.

Here’s a list of what NOT to do before you practice:

Do not try to organize your yoga space.
Do not make a list of all the poses you are terrible at, and plan to do those.
Do not call anyone (including a long-winded friend, your mother or customer service.)
Do not weigh yourself.
Do not thumb through your ipod looking for the perfect playlist.
Do not worry that you won’t do the pose like we did it in class.
Do not think that you have to do this perfectly.

Follow the sage advice of that ancient sage, Nike, and… 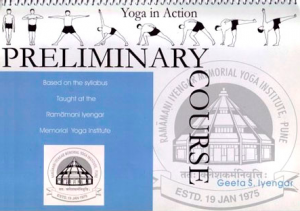 Yoga In Action:Preliminary Course by Geeta Iyengar (pictured right): a great resource for yoga at home. Available at EYC.

Stay tuned for details about my special upcoming 3-class series on practicing on your own!
Namaste!