I am not who I used to be

I am no longer a baby in my mother’s arms.  Because of this, I can no longer just poop whenever and wherever.  Now, when I cry there is no loving mother bringing my mouth to her breast for sustenance.

I am no longer a 24-year-old single girl lying on the beach in my red swimsuit.  Handsome young men don’t offer to buy me dinners.  In fact, most men under 45 don’t notice that I exist.

What a shame that now at 42 I am no longer who I used to be.

When I feel myself wishing for the “good old days,” what am I really wishing for?

When will I learn that there is no such thing?  My nostalgia for the glory days of youth is nothing but selective memory.

In those memories I am free, beautiful, unburdened, and virtually unscarred by life.

But is that who I want to be now?

I’ve traded in my baby booties for a good pair of walking shoes that are taking me down roads I’ve decided to roam.

My teeny bikini has been replaced by a pair of high-waisted pants.

I make my own dinner. And in the summers I grow my own dinner in my front yard garden and cook it up myself in the kitchen I helped create.

My quest to attract the attention of a knight in shining armor has manifested in a 15-year marriage to a man I love, the “adoption” of his now-adult kids, and the opportunity my step-daughter has given me to nurture her baby daughter who calls me “Nana Leah.”

My life is no longer ‘saved’ on a daily basis by a mother who swooped me up when I fell down and bandaged my skinned-up knees.

It’s saved by me.

I have been rescued from who I used to be.

I have been rescued by my self and my choices.

Every decision I have made has led me to where I am today.

Thankfully, in this my 43rd year, I will not be donning any diapers. Nor will I be reaching for my red bikinis.

My definition of freedom has changed.  Freedom no longer comes from the absence of responsibility.

It comes from taking personal responsibility for myself and my life.

It’s having the presence of mind to create the life I want to live.  The ability to choose what I want and who I want to become.

I am not what I used to be.

What does it mean to practice? 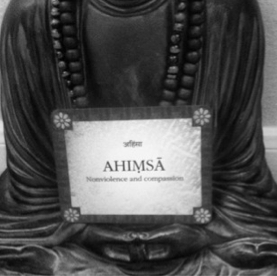 If the wings of yoga are persistent practice (abhyasa) and letting go (vairagya), we must investigate what it means to really practice.

I think there’s a reason why the practice wing is always mentioned first.  We have to create a practice before we can let go of the fruits of our practice.

BKS Iyengar often mentions his meaning of abhyasa as persistent practice that involves a methodology and effort. He says that this kind of practice builds confidence and refines a person’s consciousness.

He writes that vairagya is the elimination of whatever hinders progress and refinement.

My practice is strong sometimes, yet some weeks I rarely get down on my mat.  It depends on what is going on in my life.

It is hard to find the time to do an asana (postures) practice when I am overscheduled and busy.  Ironically, it is during these frantic times that I need to practice yoga the most.

Several months ago, I visited my biological father and his wife in Florida.  At 80, he has had to slow down quite a bit.

I have never spent much time with my father. He divorced my mom when I was 9, and moved to another state.  As a kid, I saw him about a half-dozen times after that.

My sister encouraged me to visit him, and she even traveled with me for the visit.

I packed my yoga pants, and planned to practice while I was there. I knew doing some yoga poses would help mitigate some of my nervousness and sadness about being there.

I never made it to the poses.

When the dinner conversation brought up some strong political viewpoints that run counter to my own, my stomach gripped into a knot. How to respond to this?

I chose to practice my yoga right there at the table!

I practiced the yama of ahimsa (non-violence or non-harming) and satya (truthfulness). These are the 2 principles Gandhi based his whole teaching on.

I chose to listen without commenting.  This was my way of practicing the yamas.  To me, being a listener in this situation was about practicing non-harming and truthfulness.

By not arguing my point of view, I feel as if I chose peace.  By not speaking out against someone else’s ideas, I practiced being steady within myself and what I think of as truth.

It was a moment-by-moment decision to sit in on the politically charged conversation.  In the heat of the moment, I considered leaving the table and heading to the rest room or getting my iphone out to check my messages.

But ultimately I stayed present.

I practiced no asanas that week. But I definitely practiced my yoga — the yamas (respect of others) and the niyamas (personal restraints).

However, I want to be sure you know that I am no yoga saint.  Sometimes I try, and fail.  And then there are those times when I fail to try.

Looking back on the trip, I am pleased with my effort.  Not in a pat-myself-on-the-back kind of way, but in a vairagya (letting go, surrendering) sort of way.

I choose to practice vairagya by giving up the idea that the visit should have been any different than it was — the meal, the trip, the father, the part it has all played in my becoming who I am.

And when I wake up tomorrow I will do my asana practice, and appreciate the sense of contentment of being home with my chosen family – my husband, the kids I helped raise, and the grand-daughter I am blessed to nurture.

Abhyasa in your practice can mean working hard in your poses.  It can also mean your continued effort to live an examined life through the methodology of yoga.

At the end of the day we are living a big life – not just contorting ourselves in asana.

Of the yamas and the niyamas, which ones do you gravitate toward?

Here’s a list of them to get you started – nonharming, truthfulness, non-stealing, moderation, greedlessness, purity, contentment, self-study, zeal, surrendering the results of your practice. 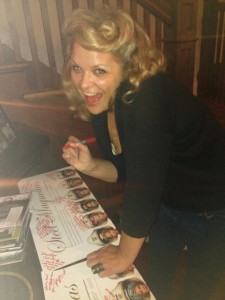 EYC student Tamara Wright recently had a huge success — a 100-pound weight loss.  A student of Courtney, Tamara has attended the Monday afternoon classes religiously. As we watched her body transform over the past year, it was fun to see her progress.

You are an actress, appearing frequently on stages in town – what is your “real life” job and how do you manage to juggle your work with your acting AND with all of your new lifestyle changes?

Juggle is definitely the right word to describe my life!

By day I work as an Inventory Analyst at Medtronic Spinal/Biologics, where we have a lovely on site gym which offers yoga classes.  When job stresses take their toll, I make sure to fit one into my day.

I try to squeeze in workouts on my lunch break, to leave my evenings open for rehearsal, clients or playing with my pups.

My life’s passion is split between my work as a massage therapist, actress and Chihuahua mama. Theatre and massage therapy feed my need to touch people’s lives with an immediacy that I don’t get to experience in the corporate world. And a kiss from one of my four Chi’s is the perfect way to start and end the day.

How do you spoil or pamper yourself?

One of the joys of having a new body is gaining a new wardrobe. I’ve always been a clothes horse and many rewards along the weight loss journey have been of the fashion variety. But when I need something extra special, I schedule a massage. I also have a standing monthly appointment with my reflexologist and bi-monthly visits with my chiropractor with on-site massage therapy. I am blessed to know many talented LMT’s and encourage everyone to do themselves a favor and make massage/bodywork a regular part of their life.

Click here to read the rest of the interview.

I admire athletes for their dedication and determination.

I’m not in training for a competitive event, like the World Cup or the Olympics.  But as I’ve worked with my coach Bill Burtch, I’ve come to see that bringing my best to my life and my work takes training. Just like an athlete.

I kind of picture myself that way — with Bill as my coach — developing the fierce determination and grit of a world-class athlete.  Just applying these qualities to my life’s work instead.

On the days I feel lethargic, Bill says just the right thing to get me inspired and moving again.
We started the coaching process talking about my core purpose and my core values.  I originally thought that this process of discovery would be more like me figuring out things about myself that I never knew before.

But it’s been more like putting words to things that I’ve known all along.

I’ve discovered that naming something for what it is brings definition and power to it.

Putting a label on a feeling and discussing that feeling empowers me to do something with the feeling….explore it more, maybe lean into the feeling, and ultimately to let the feeling go.

This was a big deal for me when I first started doing it in therapy many years ago.

Coaching is not really therapy.  Coaching is more action-oriented, rather than feeling-oriented.  I have found coaching with Bill to emphasize the present with a focus on my future.  For me, therapy encouraged me to look at the present, with a focus toward healing the past.

Bill has helped me name my values and my purpose.  As I move forward, I have these to guide me toward my vision.

My purpose & values help me remember who I am, what I’m doing and why.
I’m pretty excited about this!  So I didn’t just write down my values, I drew a picture of them so I could see them more clearly.  Bill described them as concentric circles – overlapping and intertwined.

I drew the Olympic rings.  They symbolize strength, unity and fierce determination —  a fitting symbol for me.

They define who I’ve been, who I am, and they will guide me as I move toward who I will become.

But for now when I look at this little sketch, I like what I see! 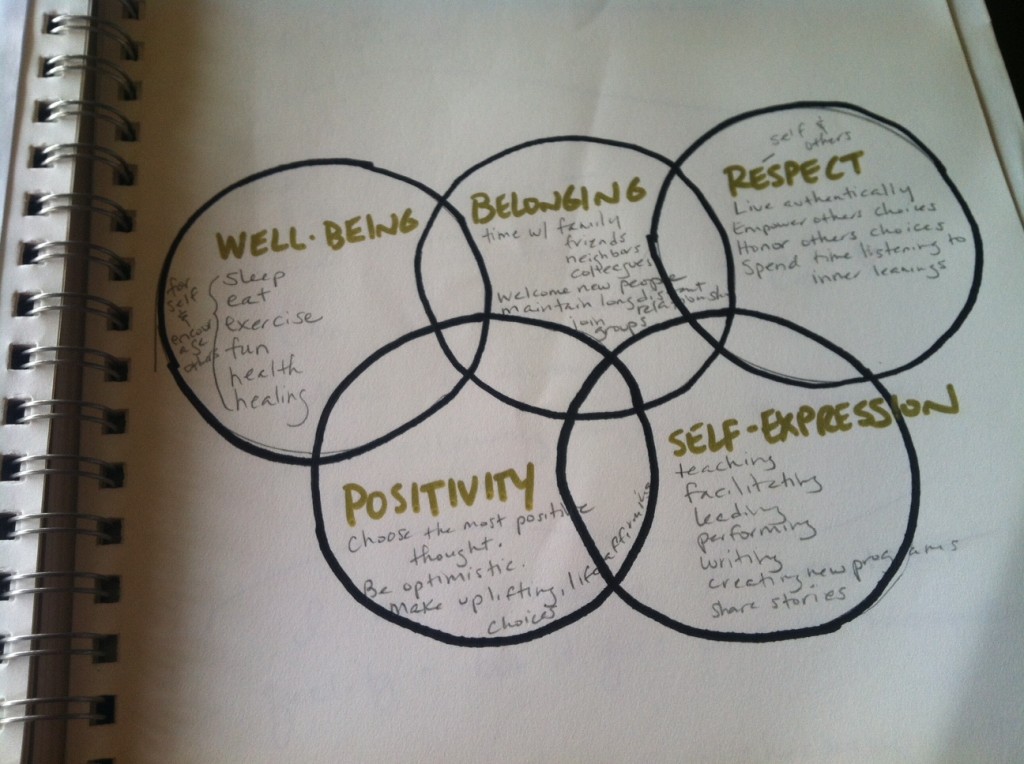